When was the Iron Age?

The Iron Age began around 700/650 BC and ended in AD 43 when the Romans conquered Britain.

What was the Iron Age?

Iron was used for making tools and weapons. Gold and other metals were used for coins and jewellery.
Iron Age farmers grew crops and vegetables. They kept geese, goats and pigs and had large herds of cows and flocks of sheep. Some people worked as potters, carpenters and metalworkers. They trained as warriors and had to be prepared to fight.  British Iron Age exports included metal, grain, slaves and hunting dogs. Imports included olive oil, wine and pottery.

Where did people live?

People lived in settlements comprising of round shaped houses constructed of locally available materials, with pointed thatched roofs. Inside a round house there would have been one room with a central fire, for cooking and warmth. Around the walls were pottery containers for storing food and beds made from straw covered with animal skins or woollen cloth.  People also occupied hillforts, fortified hilltops which can be seen today in the landscapes across north west Europe.

How was society organised?

People lived in tribes. Roman writers tell us the names of some of the tribes of Britain. By looking at the evidence from coins, archaeologists think that at the end of the Iron Age parts of Somerset may have been occupied by three different tribes. The tribes are known as the Durotriges, Dobunni and the Dumnonii. The Durotriges lived in Dorset and south-east Somerset, the Dobunni were in Gloucestershire and north-east Somerset and the Dumnonii lived from west Somerset into Devon and Cornwall.

Is there any local evidence for the Iron Age?

A small farm was discovered in 1970 at Dibble’s Farm, Christon, as the M5 was being built. One skeleton had a bracelet on its arm. The remains of a small dog were discovered close by. This can be seen on display in Weston Museum and has been nicknamed ‘Rusty’.  Nowadays development sites are checked for archaeology before building starts. For example, an Iron Age farm was excavated by Wessex Archaeology near junction 24 on the M5 in 2006. The archaeologists excavated two round houses and found traces of early fields and compounds.

In the late 19th century/early 20th century nationally significant discoveries were made on the Somerset Levels, known as the Glastonbury and Meare Lake Villages. These were excavated by Arthur Bulleid, A Glastonbury doctor and Harold St George Gray, curator of Somerset Archaeological & Natural History Society’s museum in Taunton. Today the ground is covered by grassy bumps, but the two men and their workforce of diggers discovered evidence of artificial settlements raised up from the surrounding swamp and bog. 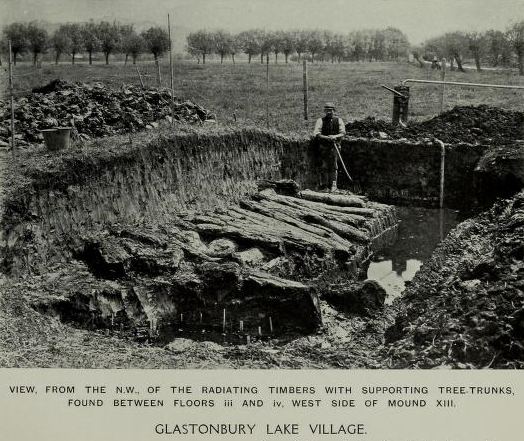 Around 200 people are thought to have lived here. As well as round houses made of wattle panels and thatched roofs, a large amount of artefacts were found preserved in the bog. This gives us a detailed insight into the personal, industrial and craft life of the late Iron Age. Pottery vessels were used in connection for food, for cooking, storage or eating. Charred wheat, barley and beans show what they ate. Preserved wooden artefacts included containers, parts of a wheel, handles for tools and even a ladder. Spinning and weaving equipment and a large amount of sheep bones showed that the production of woollen cloth was important. There was also evidence for metal working and bone and antler working.

What is a hillfort?

Monuments known as hillforts can be seen today. A hillfort occupies an area on a hilltop enclosed by a system of defensive banks and ditches. These defended settlements were used as trading centres. In North Somerset there are hillforts at Worlebury in Weston-super-Mare, Cadbury at Tickenham, Cadbury at Congrebury, Banwell, Wain’s Hill at Clevedon, Backwell and Dolebury at Churchill. Hillforts also exist at nearby Brent Knoll and Brean Down.

Worlebury Hillfort is located on the hill overlooking Weston-super-Mare and the Bristol Channel.  There were excavations here in 1851, which revealed 93 crop storage and rubbish pits as well as pottery vessels, bone, wood and antler tools. The pits were stone-lined and burnt grain such as barley, wheat and oats were found along with the pottery containers they used. There was also evidence for raised granaries and ovens. The nearest water supply was from a fresh water spring at nearby Spring Cove.

The hillfort has seven banks and ditches on the eastern ramparts. The ramparts were constructed in a series of dry-stone walls which acted as support for additional defence, with a wooden fence on top. They are most visible at the eastern side. The cliff at the northern side of the hillfort would have been used a natural line of defence. The people lived in round houses and farmed on the hillslopes. Life came to a sudden end when an enemy attacked and the people were killed.

Have any human remains been found locally?

Human remains were discovered in the crop storage pits inside Worlebury Hillfort, Weston-super-Mare. They had been hastily thrown in and many showed cut marks to the skulls and limb bones strongly suggesting they had met a grisly end by assailants. Other human remains were found buried in pits just above Grove Park.

How does science help us to understand more?

In 2018 Dr Richard Madgwick, an archaeological scientist at Cardiff University visited the Somerset Heritage Centre to look at the remains of 130 people held in collections cared for by the South West Heritage Trust. He took samples and by looking at how bacteria attacked the bone microstructure, it was possible to discover how the remains were treated immediately after death. Different funerary practices leave different traces of bacterial attack.
The team discovered that excarnation – exposing a body to the elements through so-called ‘sky burial’ – was rarely practised in Somerset. Instead it seems that most people were buried soon after death but dug up when soft tissue had rotted away. Some bones were then extracted and circulated or curated before being deposited elsewhere.
Isotope analysis on surviving human teeth allowed the team to work out where 40 of the individuals had grown up. It seems that 31 people were probably raised in Somerset and nine came from further afield. Of these nine, three were probably from the Mediterranean and one from Brittany.  The project was featured on BBC Four’s ‘Digging for Britain’.